Since making the decision to depend partially on the grid for heating (and other electrical needs), I have learned some new information about how things work in the residential world, thanks to Kerry, Tim’s very handy dad. This is really important for all Tiny Housers to know, yet I haven’t come across it anywhere online. Thankfully Tim’s dad knows basically everything there is to know about building any kind of structure so we were very fortunate for his insight 🙂

This is skipping ahead a little, but it is important to consider at this stage because of the wider impact your chosen energy source will have on your situation as a whole.

In order to connect to the grid, NL Power requires you to be connected to either town sewer or an approved septic tank.

Now, this may seem like an obvious thing that you would do, but not so for a tiny house. Most tiny housers (us included) tend to install composting toilets, which eliminates the production of black water and hence the need for traditional sewer arrangements. We will only produce grey water, which can be used to water plants (as long as all products used for washing are biodegradable) or be collected in a holding tank for later disposal. In case anyone isn’t sure about the jargon here, black water means waste water coming from toilets, which is totally contaminated, and grey water is waste water coming from sinks, washing machines, and tubs/showers.

This is where deciding on your degree of permanency earlier on can be very helpful. We were originally thinking that we’d like to avoid hooking into the mains for water and sewer, and definitely avoid installing a septic tank. However, if we plan on hooking into the grid though, it’s not going to happen without one of those two things (or another accepted alternative). This, we will have to ponder over the coming months. In addition, if we do end up having to have a permanent solution for grey water treatment, I’d be most open to installing a reed bed, which is actually capable of dealing with black water. A family friend is in the business of technology development and installation of these types of reed beds, both small scale (the needs of one dwelling), and large scale (the combined needs of an entire town). More on this in a separate post.

Assuming that we follow our original plan as outlined in the last post, we will be in the market for an electric space heater unit. There are a tonne of options, which makes it kinda hard to narrow down. But again, the best thing to do is find out the BTU/hour or watt output. We need something that can give about 10,000 BTU/hour or about 3000 watts (based on an average of the ranges I calculated in the last post). Right away, this forced us to realize that a single electric space heater won’t do- we’ll need a few in order for the space to be comfortable. In addition, we don’t want a standing unit that will take up space on the floor, so a wall-mounted unit will be ideal. I really like eheat’s Envi wall-mounted panel heater. 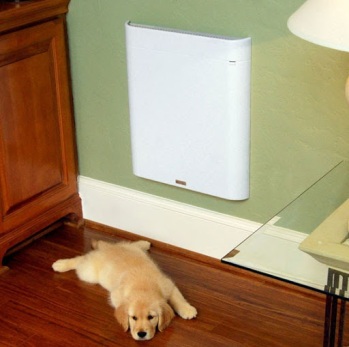 Even though it is super slim and cool to the touch, made in the States, very quiet (operating by convection instead of using a fan) and is wall-mounted, preventing any risk of tipping over and causing a fire (I realize I’m sounding like a commercial…lol), there is one huge drawback. This heater, like many others similar to it, is rated at 450 watts. On the website it claims to be able to heat a 130 square foot space, meaning we’d need 2 to 3 units. But based on our BTU calculations, which takes into account the ceiling height, climate, and insulation, we’d need about 6 of them to heat our space.  I don’t want to believe this because it’s so great in every other way!! But, this is why I did the calculations in the first place. I guess the only way to really find out is to try it. Also, another thing to take into consideration is that most space heaters are designed to meet a very specific need for “normal” houses: to supplement a main heating system in weak areas, such as a bathroom, or bedroom with two exterior walls. So nothing that we buy is going to be expressly designed for the kind of space we’ll be constructing, so we’ll have to find the best compromise possible.

With all this said though, I know that some tiny house users are relying on these types of heating units. For example, Brian Levy’s tiny house (Boneyard Studios), which doesn’t have a loft, has two wall-mounted panel heaters like these: 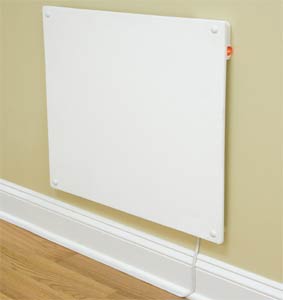 Ceramic wall-mounted Eco-Heater, as seen on any home-improvement store website

His house is in Washington D.C, and is 10 x 21 feet. It can on the off chance get down to around -10 ºC on a day or two in January down there based on a quick temperature norm google search. These are really cool heaters, basically with all the same features as the envi heater described above (it’s 400 watts), except that you can PAINT this one with low VOC (volatile organic carbon) acrylic paint to match your wall. How epic is that. His plan is the same as ours, to have a main heating unit such as wood or propane stove, with the electric space heaters as a back up to run when you’re not at home. He claims that two of these work just fine for his space.

Switching gears now, for a main heat source we wanted wood in order to avoid buying and storing propane. I remember reading ages ago about one tiny houser who found that approximately half a cord of wood will get you through the winter (for this small a space). I can’t find the link 😦 but as far as I can tell, it’s a very variable thing and it’s better to over-estimate than under-estimate. One website I found (http://modernhomesteading.ca/blog/firewood-basics-five-lessons-for-heating-with-a-wood-stove) suggests that in the northern States or Canada, you’d need about 4 cords per winter season for a 700 sq. ft. space, which would work out to about 2 cords, for our small space. It’ll be something we’ll have to work out for ourselves with experience, but I’m looking forward to it! By the way, a cord is equal to a pile of junks that is 4 ft high, 8 ft long, and 4 ft deep, densely packed. There are several options for buying bulk firewood around here, if Tim and I don’t manage to go and cut it ourselves.

This website: http://www.livinlightly.com/off-grid-heat-small-wood-stoves/
is a great resource for all the considerations of having a small woodstove in a small space. It talks about all the safety precautions such as shielding, carbon monoxide detectors, safe clearances, flues, and using an outside air source to prevent all the oxygen inside being used up. I’ll likely touch on these topics when we actually go to install our chosen wood stove.

As for the actual tiny wood stoves themselves, I am really torn. There are some really beautiful ones out there. I guess the Navigator Works “Little Cod” and “Sardine” stoves stand out to me, since they have a lot of charisma, and have their roots in Lunenburg, Nova Scotia in the early 1900s. The iron foundry in NS closed in the 1990s, but they’re still made in Washington State, near the B.C. border. They were designed for fishing boats, but obviously would be just the perfect size for tiny houses- a lot of people have had great success using them for this purpose. The Little Cod (55 lbs) is on the left below, and the Sardine (35 lbs) is on the right. 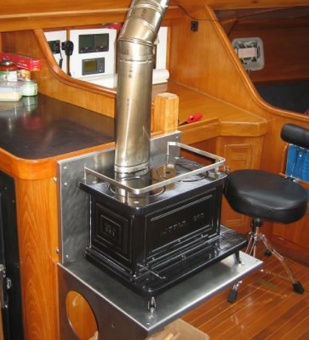 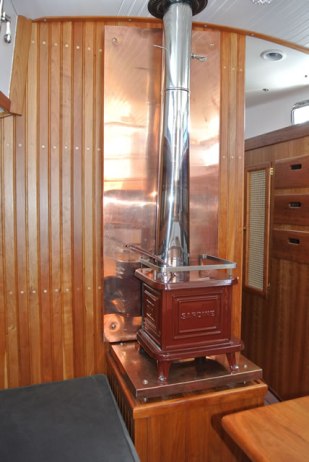 Insert brilliant, but heart breaking, compromise: check out the advice from Kai at 2cycle2gether.com. She explains that a knock off of Navigator Stove Works’ “Little Cod” was still being made by a foundry in Sackville, New Brunswick: Enterprise Fawcett Manufacturing Company. You could get a rougher cast, simpler version of the Little Cod for only $400 or so. I went to look them up, and it turns out that the foundry burnt down in 2012, as reported by the CBC. My hopes of having the perfect little stove built right here in Atlantic Canada, dashed before ever having a chance of being realized. Sad times.

Other options out there include the Norwegian-made Jøtul F100 / F602, or RAIS Gabo wood, and the Danish-made Mørso squirrel which are all beautiful. If you enjoy thoughtfully made, efficient, clever wood stoves, I highly encourage you to check these out. I think in the grand scheme of things, Scandinavia makes the best wood stoves, but it would be too expensive to get one to Newfoundland. Lastly, British-made Salamander Stoves’, Hobbit Stove is also a great little unit. I will consider this one, but apparently is very hard to get a hold of due to popular demand. 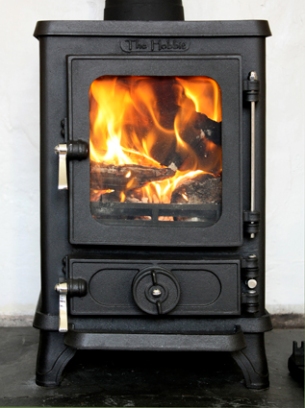 The Hobbit Stove, as seen on www.salamanderstoves.com

What’d be really spectacular would be to find an antique stove made by the Newfoundland Consolidated Foundry or the Trask Foundry, right here in St. John’s. I’ve seen lots of them on kijiji, but only the much larger conventional styled ones for cooking on. But, I will keep an eye out until the time comes to actually purchase.

Thanks for reading, and let me know if you have any suggestions for heating that I haven’t thought of!! Very excited to hear about others’ experiences and suggestions.

One thought on “Keeping the Tiny House Warm (Part 2)”